In Norse mythology, Fáfnir (Old Norse and Icelandic) or Frænir is a son of the dwarf king Hreidmar and brother of Regin, Ótr, Lyngheiðr and Lofnheiðr. After being affected by the curse of Andvari's ring and gold, Fafnir became a dragon and was slain by Sigurd.

In the Icelandic Volsunga Saga (late 13th century), Fáfnir is a dwarf with a powerful arm and fearless soul. He guards his father's house of glittering gold and flashing gems. He is the strongest and most aggressive of the three brothers.

Regin recounts to Sigurd how Odin, Loki, and Hœnir were traveling when they came across Ótr, who had the likeness of an otter during the day. Loki killed the otter with a stone and the three Æsir skinned their catch. The gods came to Hreidmar's dwelling that evening and were pleased to show off the otter's skin. Hreidmar and his remaining two sons then seized the gods and held them captive while Loki was made to gather the ransom, which was to stuff the otter's skin with gold and cover its outside with red gold. Loki fulfilled the task by gathering the cursed gold of Andvari as well as the ring, Andvaranaut, both of which were told to Loki as items that would bring about the death of whoever possessed them. Fáfnir then killed Hreidmar to get all the gold for himself. He became ill-natured and greedy and ventured into the wilderness to keep his fortune. He turned into a serpent or dragon in order to guard his treasure. Fáfnir breathed poison into the land around him so no one would go near him and his treasure, wreaking terror in the hearts of the people. 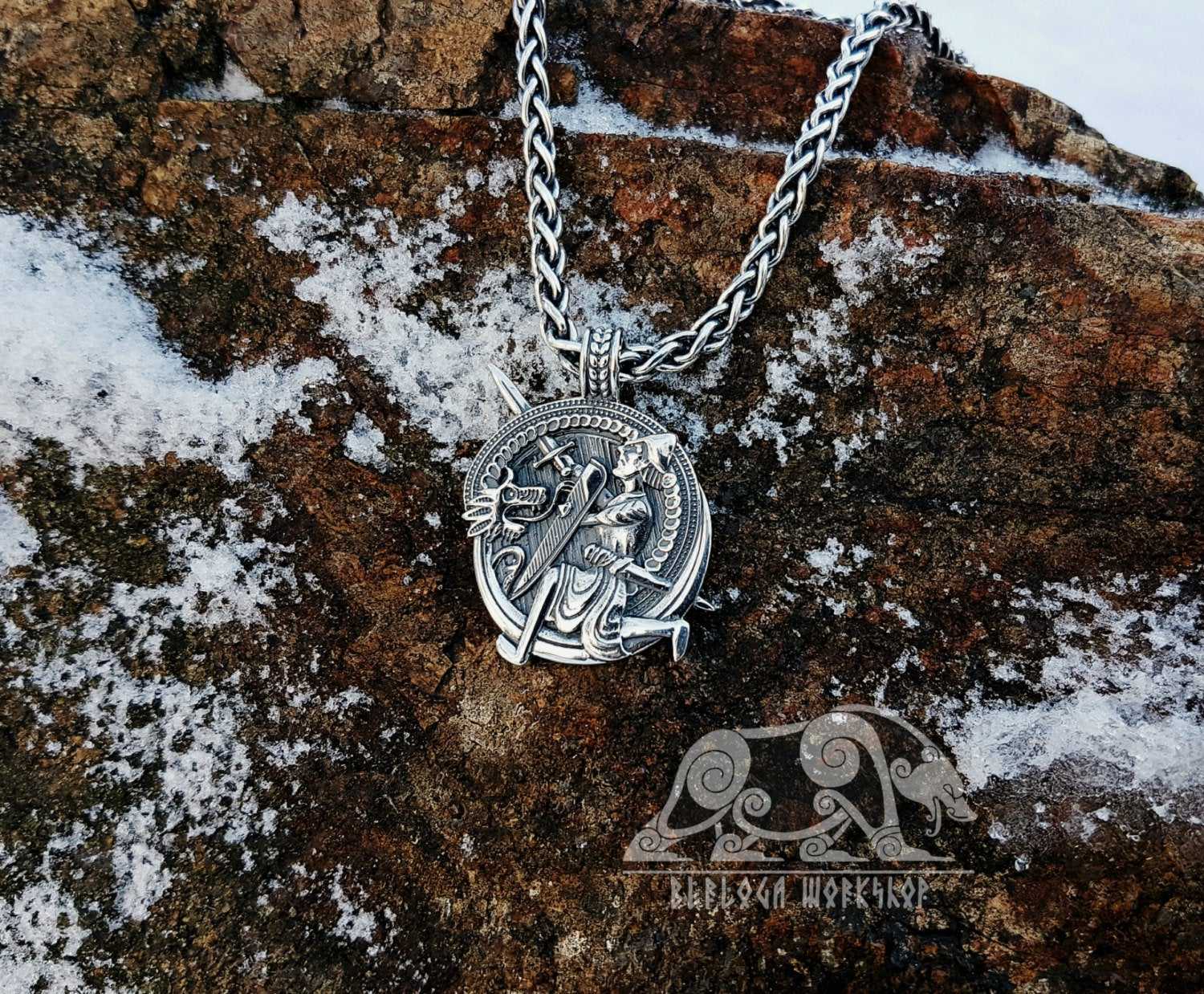 Regin plotted revenge so that he could get the treasure and sent his foster-son Sigurd to kill the dragon. Regin instructed Sigurd to dig a pit in which he could lie in wait under the trail Fáfnir used to get to a stream and there plunge his sword, Gram, into Fafnir's heart as he crawls over the pit to the water. Regin then ran away in fear, leaving Sigurd to the task. As Sigurd dug, Odin appeared in the form of an old man with a long beard, advising the warrior to dig more trenches for the blood of Fafnir to run into, presumably so that Sigurd does not drown in the blood. The earth quaked and the ground nearby shook as Fafnir appeared, blowing poison into his path as he made his way to the stream. Sigurd, undaunted, stabbed Fafnir in the left shoulder as he crawled over the ditch he was lying in and succeeded in mortally wounding the dragon. As the creature lay there dying, he spoke to Sigurd and asked for his name, his parentage and who sent him on such a dangerous mission. Fafnir figured out that his own brother, Regin, plotted this, and predicted that Regin would also cause Sigurd's death. Sigurd told Fafnir that he would go back to the dragon's lair and take all his treasure. Fafnir warned Sigurd that all who possessed the gold would be fated to die, but Sigurd replied that all men must one day die anyway, and it is the dream of many men to be wealthy until that dying day, so he would take the gold without fear.

Regin then returned to Sigurd after Fafnir was slain. Corrupted by greed, Regin planned to kill Sigurd after Sigurd cook Fafnir's heart for him to eat, and take all the treasure for himself. However, Sigurd, having tasted Fafnir's blood while cooking the heart, gained knowledge of the speech of birds and learned of Regin's impending attack from the Oðinnic (of Odin) birds' discussion and killed Regin by cutting off his head with Gram. Sigurd then ate some of Fafnir's heart and kept the remainder, which would later be given to Gudrun after their marriage.

Some versions are more specific about Fáfnir's treasure hoard, mentioning the swords Ridill and Hrotti, the helm of terror and a golden coat of chainmail. 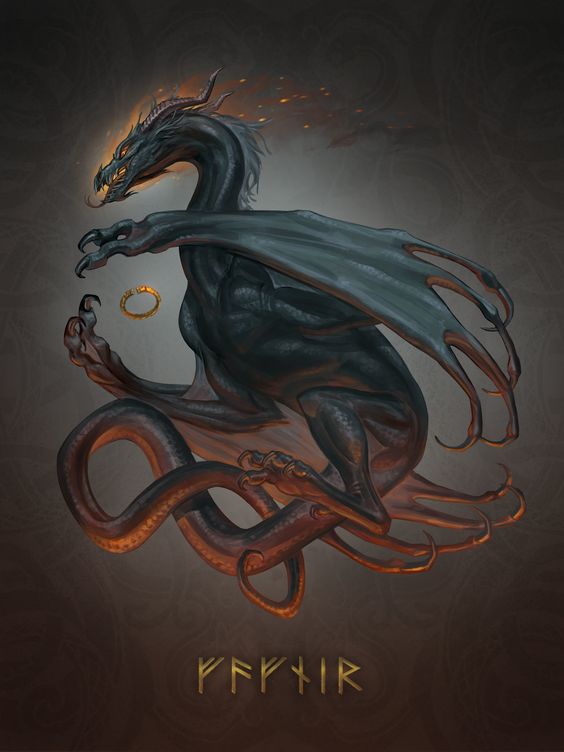 Fafnir guards the gold hoard in this illustration by Arthur Rackham to Richard Wagner's Siegfried.

Fafnir appears (as "Fafner") in Richard Wagner's epic opera cycle Der Ring des Nibelungen (1848–1874), although he began life as a giant rather than a dwarf. In the first opera, Das Rheingold (1869), which has some basis from the Gylfaginning, Fafner and his brother Fasolt try to take the Goddess Freia, based on Idun, who has been promised to them by Wotan, the king of the gods, in exchange for building the castle Valhalla. Fasolt is in love with her, while Fafner wants her as without her golden apples the Gods will lose their youth. The giants, mainly Fafner, agree to accept a massive hoard of treasure stolen from the dwarf Alberich instead. The treasure includes the magic helmet Tarnhelm and a magic ring of power. As they divide the treasure, the brothers argue and Fafner kills Fasolt and takes the ring for himself. Escaping to earth, he uses the Tarnhelm to transform himself into a dragon and guards the treasure in a cave for many years before being ultimately killed by Wotan's mortal grandson Siegfried, as depicted in the opera of the same name. The giants are thought to represent the working class. However, while Fasolt is a romantic revolutionary, Fafner is a more violent and jealous figure, plotting to overthrow the gods. In many productions, he is shown to return to his original giant form while delivering his death-speech to Siegfried. 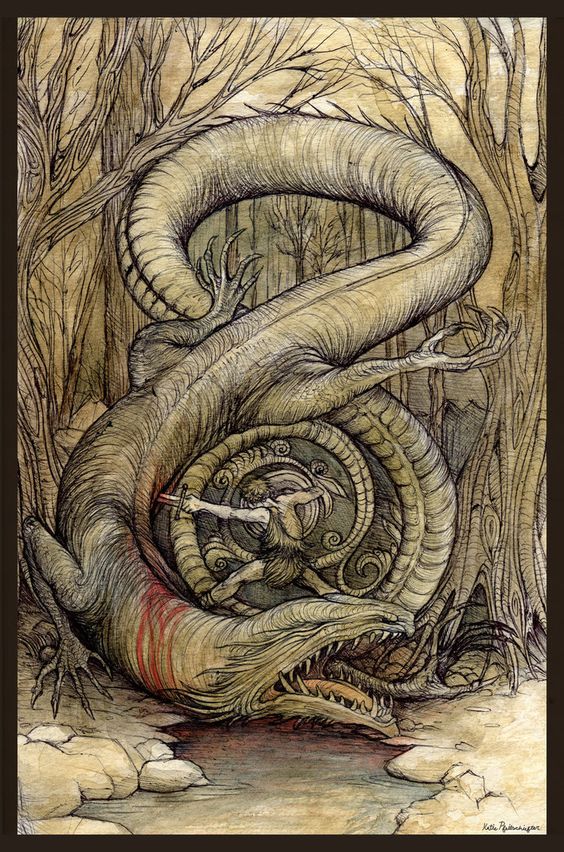 It is clear that much of Tolkien's work was inspired by Northern Myth. Many parallels can be drawn between Fafnir and Smaug, from The Hobbit, as well as between Fafnir and Glaurung, the first dragon in Middle Earth, who is slain by Turin. The exchange between Bilbo and Smaug nearly mirrors Fafnir's and Sigurd's. The main difference being that Sigurd's conversation occurs after the death blow has been struck. This is most likely due to dramatic effect, as Bilbo has much more at stake when speaking with Smaug. The other dragon Glaurung has many similarities as well. In Tolkien's The Book of Lost Tales, Glaurung is described as a flightless dragon that hoards gold, breathes poison, and has "Great cunning and wisdom". In Tolkien's book The Children of Húrin, he is slain by Turin from below much like Fafnir. Turin and Glaurung also have an exchange after the mortal blow is dealt. 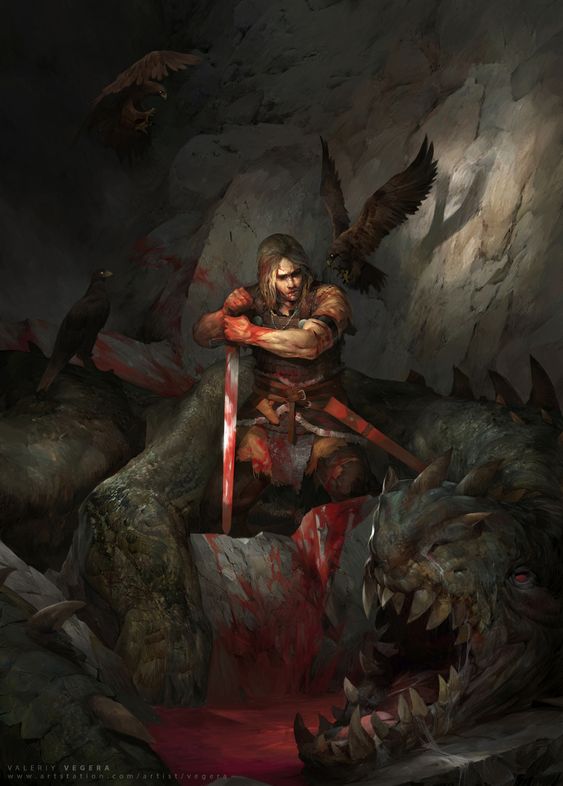